This plane (Piper PA28, EC-DSD)  crashed in January 2009 while attempting to cross the mountain “Montaña de la Crucita” (6.761ft high) during VFR flight into IMC conditions resulting in an impact in the mountain at 5.700 feet, just 1.000 feet bellow its top. 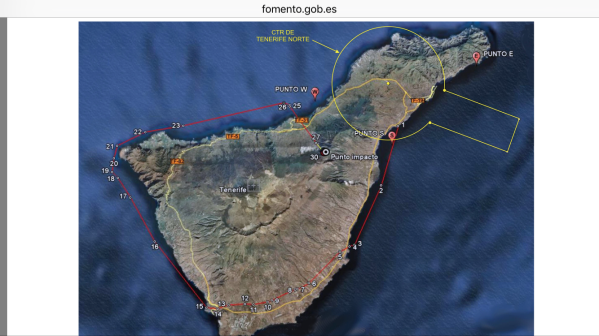 The 3 occupants were injured and were rescued by the helicopter of the Guardia Civil. There were no fatalities. 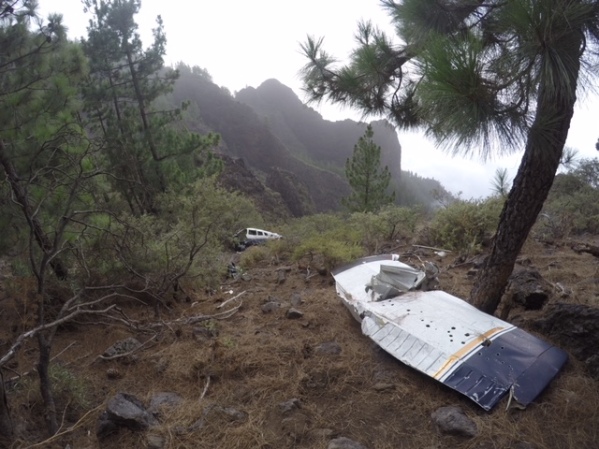 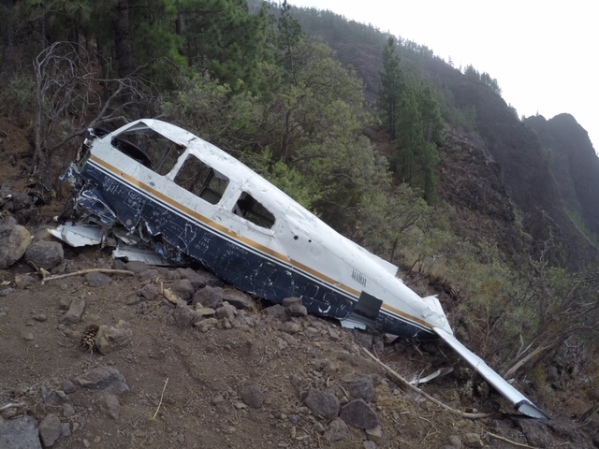 The slop of the mountain. 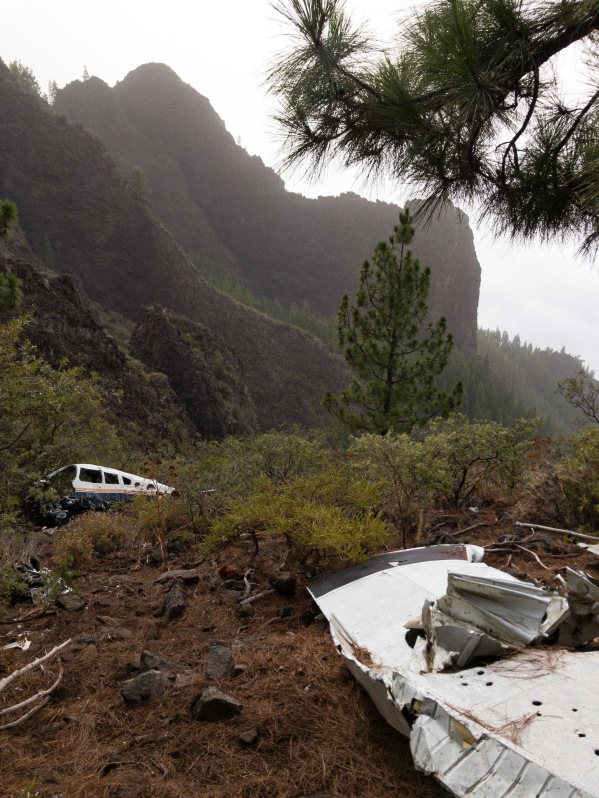 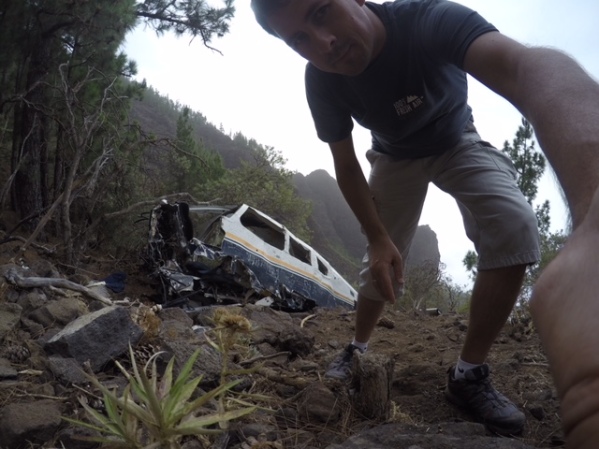 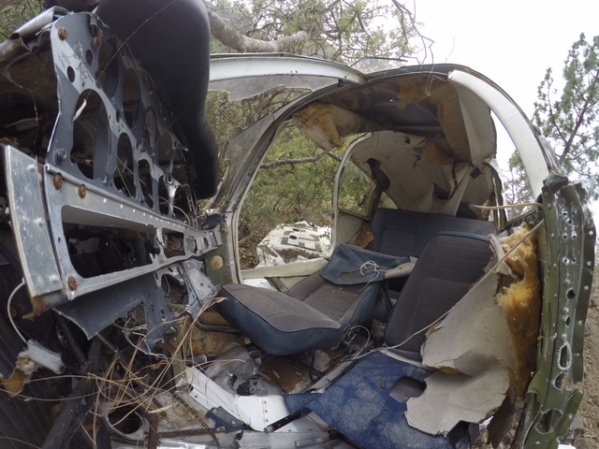 The plane seems to be moved from its initial position and most of the parts are already missing. 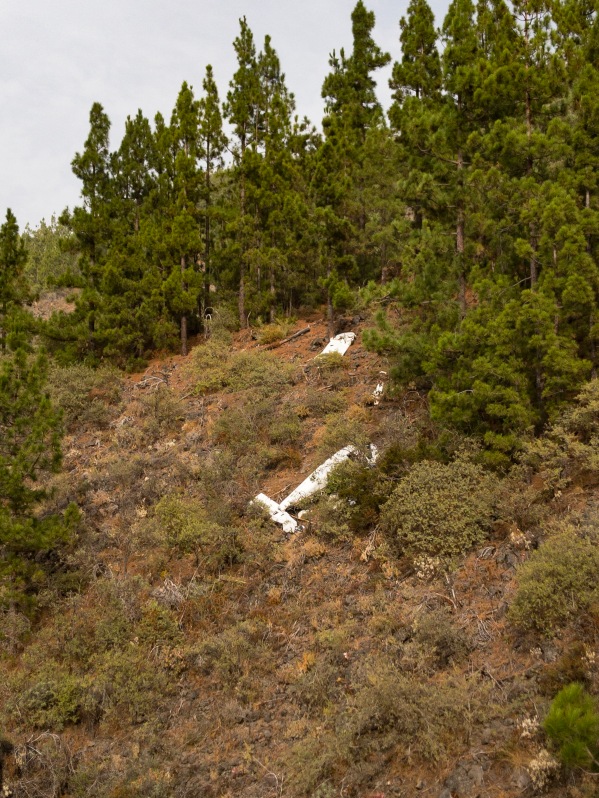 The plane seems to be moved from its initial position

The crash site is only 1 km from the road, but the access is difficult. On the images you can see the slope of the mountain and the surroundings; I´ve attached the plane´s route as well.

You can park your car at the Mirador de la Crucita and start walking from there: 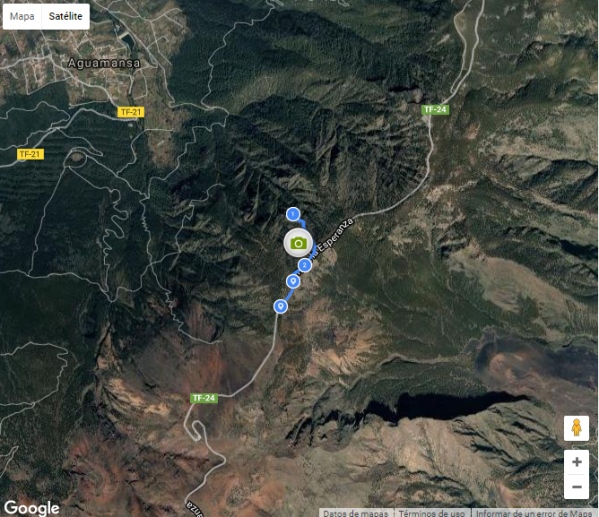 On the 22nd of march 2019 the plane was transported by a helicopter to a scrap yard, where it will be scrapped by a company Rimetal. This was her final flight after 10 years on the mountain.

Flying in Canaries is possible the whole year, also in december. The only thing is, that due to weather conditions, sometimes you have to have patience in the weather in the case there is fog and clouds until they disappear. Luckiy it is not necessary to scratch the ice ;-).

Mostly in the winter months there  is more rain in the north part of the island, where the aeroclub is situated (at 2.078 feet). Therefore it is sometimes difficult to depart in the early morning hours. It is neccesay to delay the flight and to wait and hope, that the sun warms up the air so the clouds (mostly stratus and cumulus) disappear to go ahead with a VFR flight. 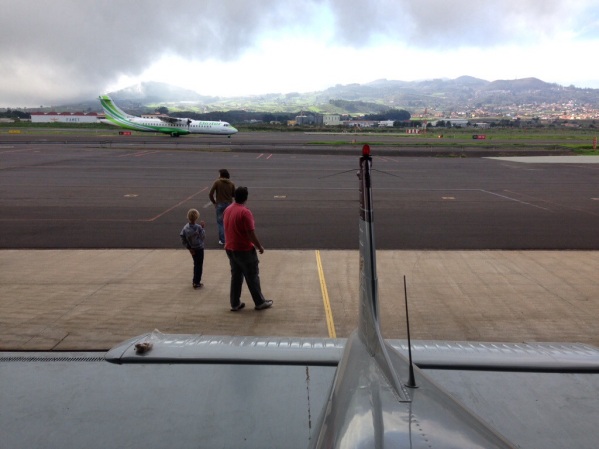 Waiting for the weather improvement

On this occasion the weather on our arrival around 9 a.m. was not the best one, some very low clouds were covering the runway, so no VFR conditions were available and LVP (low visbility procedures) has been activated as well…

The time on the ground has been used efectively to polish the windscreen and windows; I love to have a good visibility and the images are pretty much better! 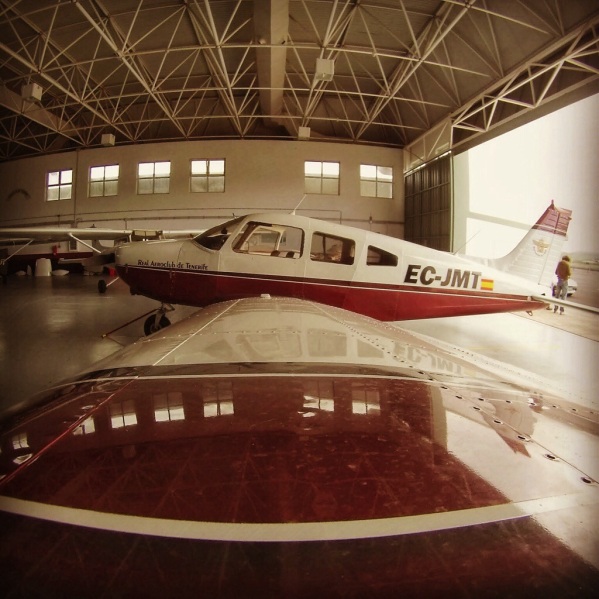 Preparations for the flight in the hanger

The theory worked today and after 2 hours the weather has improved and we were able to go ahead with the flight.

Today’s route was scheduled from Tenerife to La Gomera and back, with a complete round trip and some low passes at La Gomera airport (GCGM) and the former island’s airport “El Revolcadero”. The weather on route was fantastic and the wind was calm. 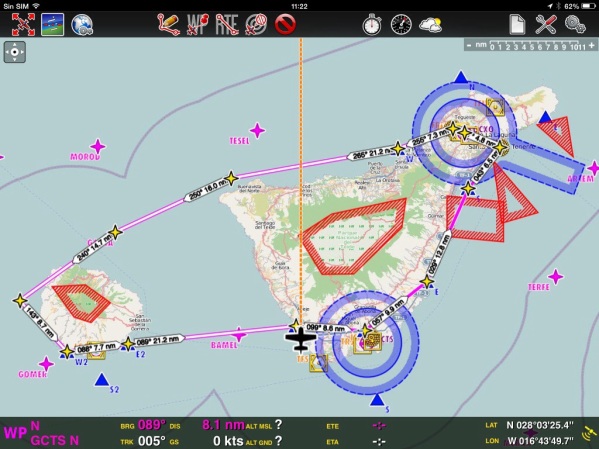 After departure we have followed the coastline heading south, continued to the west to La Gomera. I flew several times to La Gomera, but never came closer to the capital San Sebastián de La Gomera to see it from the air. Today it was the moment to explore how the area looks like from the air… The coastline is impressive, there is a lighthouse situated on the small cliff. I loved how the coast does look like; this part of the coast with its lighthouse remembered me at the coast of Ireland… 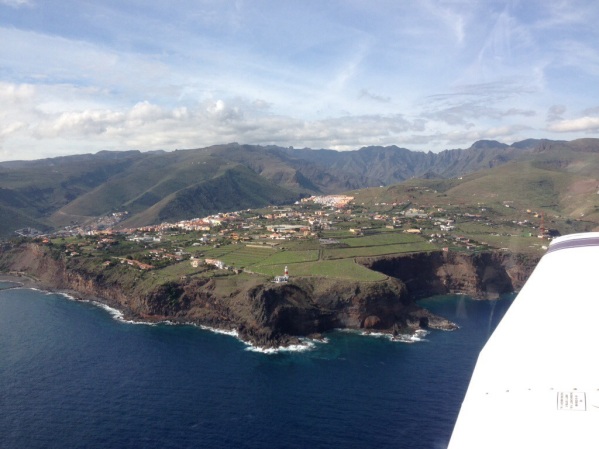 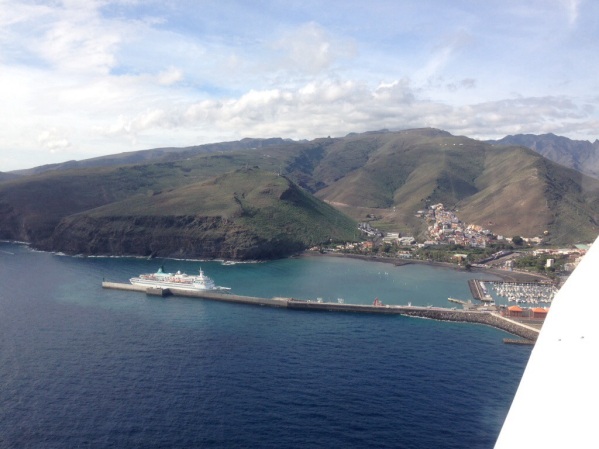 We have completed the island tour and continued to the east back to Tenerife North airport (GCXO), where we have landed on the Runway 12. It is very nice to land this on the RWY 12 in the winter time, as the grass gets nice green. Following Air Europa’s 737 we have proceed to the parking. 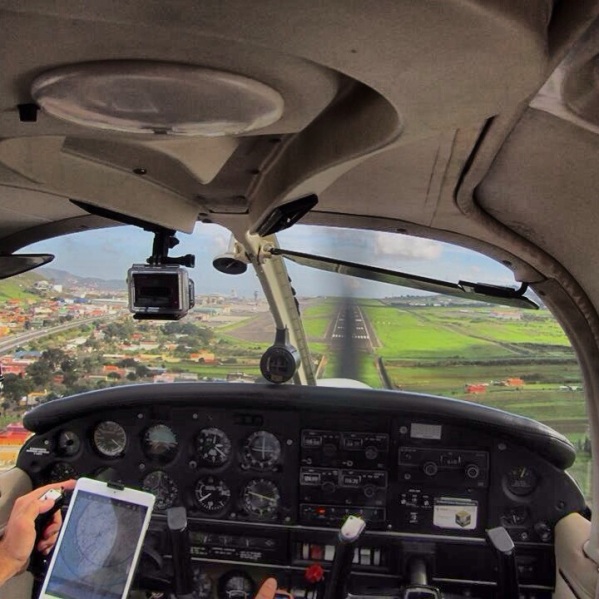 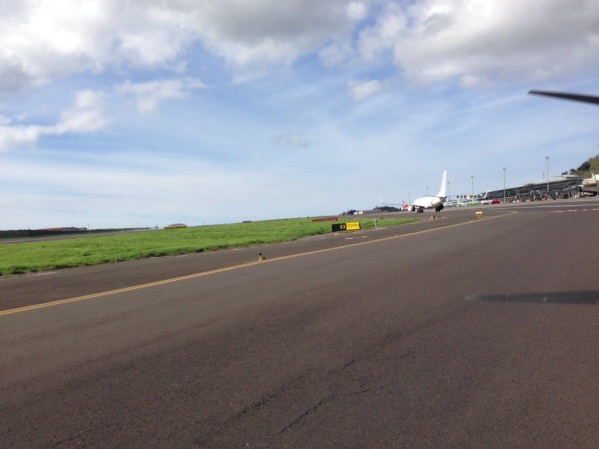 Following Air Europa to the parking

I have tried to “squeeze” the whole trip into a 3 minute “short” “fast forward video”. Hope, you´ll enjoy it as much as we have enjoyed the flight!

Just a quick post over my landing at El Berriel aerodrome in Gran Canarias a couple of weeks ago… It has been a time ago that I have landed at this aerodrome, and it is famous for windshear, so my first attempt for landing was not succesfull and I had to made a go around for the second attempt.

On this day the gopro was mounted on the belly of the plane, so it offers a nice views of what is happening under us… On the following picture, you can see the views over the El Berriel aerodrome. 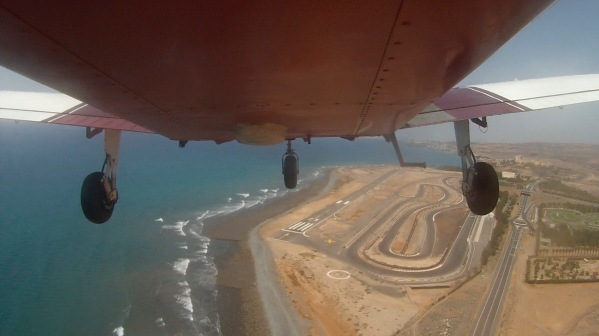 During the second attempt I stayed sligtly to the right from the centerline, had to make some corrections, and finaly was a little faster than I should have been. As the field has only 800 mtrs., I didn’t wanted to spend more time flaring the plane and wanted to come down faster; so the result was a bounced landing: 3 landings at price of 1 ;-). As the gopro was mounted on the belly, you can count the number of landings by yourself 🙂

Ladies and gentlemen I have no idea where we are right now, but I like it here 😊
Approach into cloudy Tenerife south airport 🛬
On ☁️ 9️⃣
Above and below the clouds… ⛅️ ☀️
Arriving into El Hierro 🛬 #elhierro #arroival #approach #runway #aviation #generalaviation #cockpitview #sky #instaaviation #instagramaviation #diamondaircraft #da40 #garminaviation #garmin430 #pilot #canaries
Flying home at sunset 🌅 😊