La Gomera’s former aerodrome El Revolcadero was closed so far for more than 25 years.
The visit of this place has been on my bucket for more than 7 years, and now I finally decided to move on and make it happen. Just wanted to travel back in time and see how it looked liked there some 30 years ago.

The aerodrome was officially opened on the 24th of April 1959 and the first plane landed on the aerodrome was a Piper PA23-160 Apache (EC-ALQ), which landed at El Revolcadero on the 15th of July 1959.

The runway was 500m long and at both ends it counts with up-sloping “stopways” helping the planes to slow down after the landing and most probably to help to gain speed during the initial take off run as well.

The runway designation was 27/09, same as the new airport which can be seen on the next cliff behind the old aerodrome.

The aerodrome (still) counts with a small hangar, tower and a small power plant building.

It’s just a fascinating piece of history, you just need to imagine that people were passing during years through the airport.

During the last years I flew a lot of times by, and need to admit that I’d love to land at the aerodrome or to see again some signs of “life” there.

The place, where the time stands still… Quiet… Visited by some curious tourists now and then, and by the goats.

Unfortunately, there is not much information to be found about this aerodrome on internet, nor images of the planes at the aerodrome, nor the date when it was closed. But definitely at least some 25 years ago, as the new airport started their operations back in 1999.

So enjoy some more images and the video of this experience, and for those who’d like to know how to get to El Revolcadero, you can find it here.

Just a quick post over my landing at El Berriel aerodrome in Gran Canarias a couple of weeks ago… It has been a time ago that I have landed at this aerodrome, and it is famous for windshear, so my first attempt for landing was not succesfull and I had to made a go around for the second attempt.

On this day the gopro was mounted on the belly of the plane, so it offers a nice views of what is happening under us… On the following picture, you can see the views over the El Berriel aerodrome. 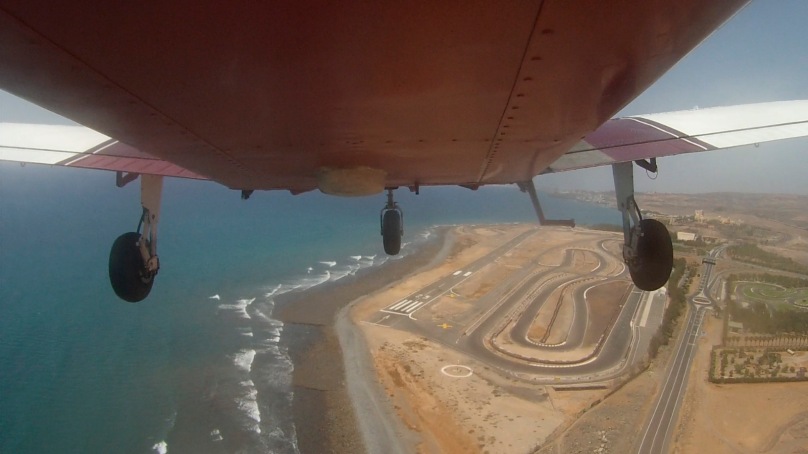 During the second attempt I stayed sligtly to the right from the centerline, had to make some corrections, and finaly was a little faster than I should have been. As the field has only 800 mtrs., I didn’t wanted to spend more time flaring the plane and wanted to come down faster; so the result was a bounced landing: 3 landings at price of 1 ;-). As the gopro was mounted on the belly, you can count the number of landings by yourself 🙂