After visiting the closed aerodrome “El Revolcadero” at La Gomera, I did mention that my next stop will be at Breña Alta, to explore the former La Palma’s aerodrome.

So here it comes. Unfortunately there is not much to see around. A road is passing on the former runway and the terminal building and the tower are not accesible.

The elevation of the aerodrome is 1.3700 feet and is surrounded by mountainous terrain, which I think was the cause why the aerodrome was closed. When clouds start to form, visual approach into this airport could become pretty complicated or maybe impossible.

The aerodrome was opened in 1955 and served until 1970. Unfortunately don’t have any more information about the runway length, nor designation.

The Tower building looks to be still in a pretty good shape, considering it was closed for more than 50 years. Unfortunately the access was blocked, so it’s not possible to climb up to enjoy the “old airport” views.

The terminal building doesn´t look that bad either. But again, it’s not accesible. All doors and windows have been blocked.

And how about the runway? Well, on Google Maps you can clearly see that once there was a runway, now a road is passing on it.

Tried to measure the length of the runway on my Foreflight App and i’m getting a bit less than 1km of runway. As I don’t know where it exactly started and finished, it’s difficult to say how long it exactly was.

At least you can drive on the runway. Should have paid attention to the distance the car would have measured to know the exact length. And I think I did it, but forgot the note it somewhere…

And this image looks like the apron just in front of the tower and terminal building.

Well, that’s it folks! A piece of history, pity they didn’t make anything special of it. But it seems there were a lot’s of problems with the ground and properties. But this would be something for a “non aeronautical post”, which is not my case.

Yesterday the weather was fantastic and we took of early from Tenerife south airport on our training flight toward the island La Palma. As there was not much traffic, we decided to practice with the student the SID (standard instrumental departure) and the arrival into La Palma.

Even though that we operate under visual flight rules, we can request simulated instrument departure or arrival and simulate it under VMC. We briefed the procedures with my student and requested the simulation.

We did the Araco 4E departure followed by the NDB36 into La Palma airport as you can see on the image from Flightradar24. It was a very good practice. After we took off from La Palma again, we flew around the island and enjoyed some spectacular views of the landscape.

Enjoy some more images from the journey.

First time that I was able to fly over the volcano at La Palma after a long time.

Even if the volcano is not active anymore, it still looks pretty hot.

Difficult to find the words to describe this…

Looks like this is the best image I’ve ever made…

More than 1.050 shares in 4 days on Facebook, and still sharing… 😀 The strange thing is even when you don’t expect the image is going to be liked, and the audience loves it!

I didn’t get any richer with this, but it’s simply nice that the image had such a huge success 😀

So, I think this would be the best shot ever taken by myself, at least it’s what the audience thinks 😉

On my last flight I went to visit the island La Palma; and we did a round flight as well.

I took the opportunity to make a timelapse, so everybody can see the coast of the island in less than 3 minutes.

And also some images as well…

Recently I’ve made a flight with 2 friends spotters on the Piper from Tenerife North to La Palma and back.

As this was the first time for them on a small plane like this one, they were really enjoying the views from the cockpit and also from the co-pilot seat.

The weather was actually pretty good, almost no wind, no turbulence. Only some cloud layers between 3.000 – 8.000 feet. We were able to climb to get about them and wnjoy the views of the sea of clouds. It feels like to fly a big airliner…

The basic instrument training I´ve done was a great help to maintain the plane on the desired track when descending through the cloud layer. The basic thing is to look inside the cockpit on the instruments and trust your instruments and don’t look outside.

We did one touch and go at La Palma Mazo Airport (GCLA) and returned back to Tenerife North (GCXO). It was a great trip with great views  in a great company!

Here I share with you some of the views and of course a short video as well.

Above the sea of clouds cockpit view 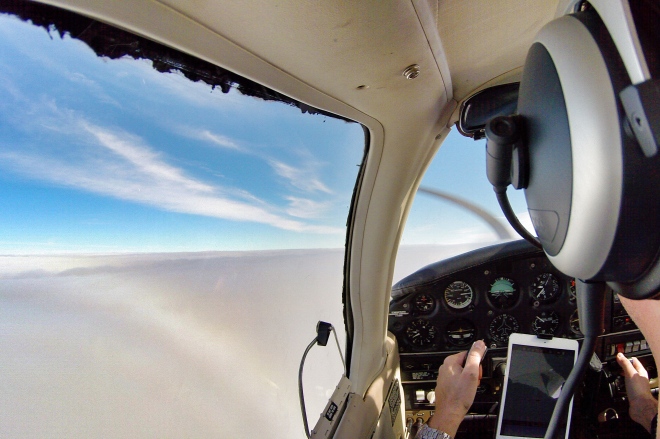 Above the sea of clouds

About to touch and go at La Palma airport (GCLA) 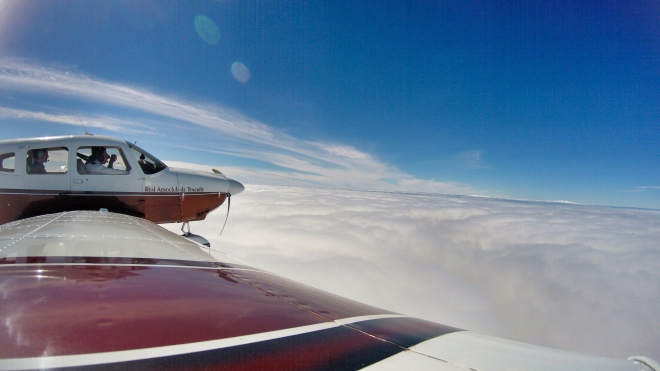 About to land at my home airport GCXO (Tenerife North)

The most of us are flying to enjoy the 100$ hamburgers. In Spain we could speak about something similar, as for example “100$ paella”.

My last flight went to La Palma, together with my friend Daldo and his wife Virginia as passenger.

I was flying the inbound leg and we were cruising at 8,500-9,000 feet. Pretty nice views over the Atlantic Ocean, the sea was very calm, but we were having some headwinds of 20 kts which made this flight a bit longer and of course a bit more expensive ;-), that is why I speak about 200€ paella ;-).

Some different views of Tenerife

Actually I enjoy flying high(er), as there is normaly less turbulence and you can enjoy better views. Also, in the case of an engine failure, the range of possibities of gliding or trying to restart it, are better, as you gain time. And also, you feel like you are flying a real arliner ;-). So there are only a advantages of flying at higher altitudes. 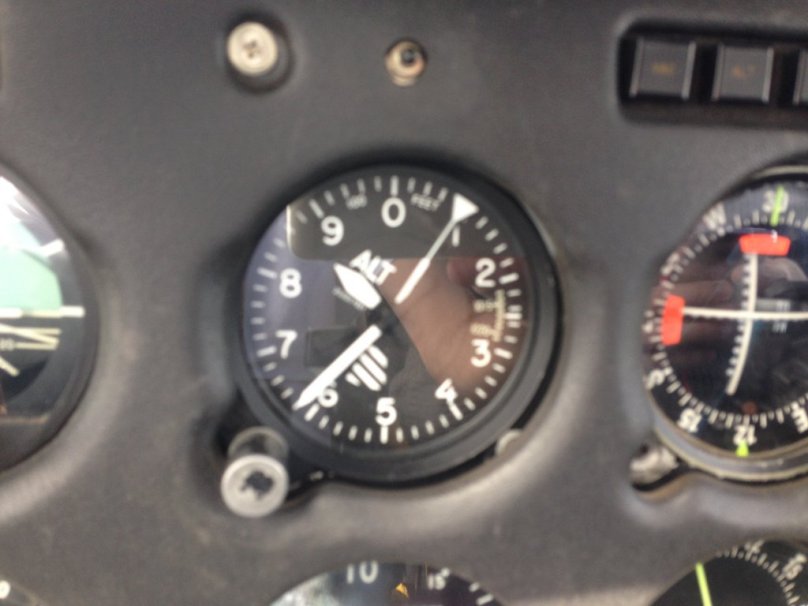 Cruising at 8,600 feet (Sorry for the bad quality)

The icing was forecasted for this day at 9,000 feetm the OAT was around 2 degrees, but no ice was forming on the wings. We were cheching it constantly, for just in case, however we were not flying in the clouds and the day was pretty sunny as well. 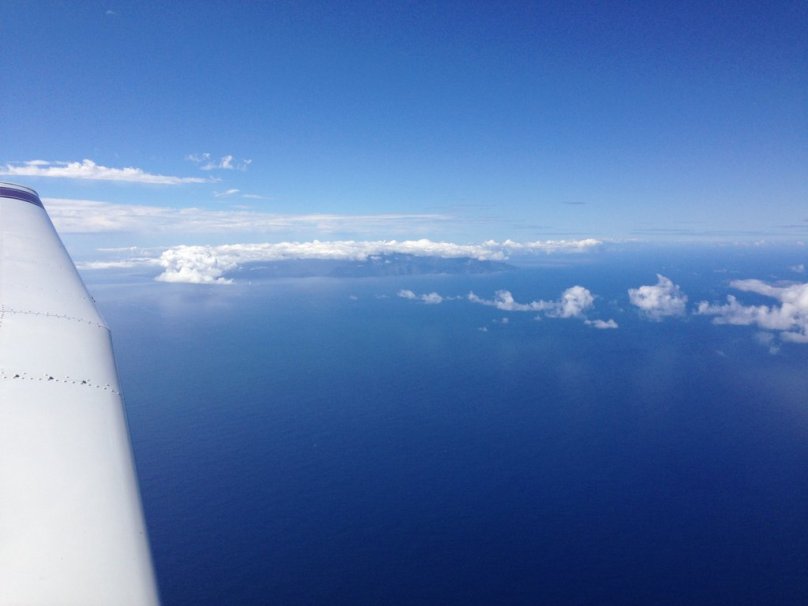 Reaching La Palma island we have maintained 9,000 feet and made some cloudsurfing. The weather forecast for today was some rain and also a front was comming from NW. We have decided to do this flight anyway, as the visibility was ok, no clouds were in sight, and in the case the weather would starting to change, we would return back to our base airport. 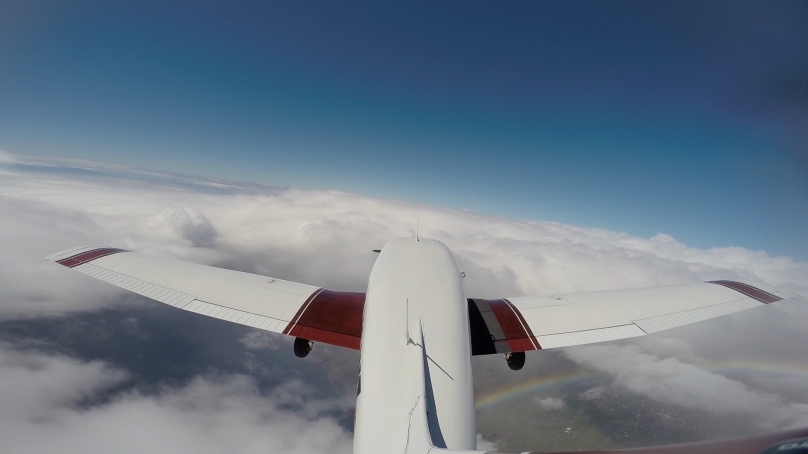 Cloudsurfing over La Palma and the rainbow

After this short cloudsurfing, we have started our descent to the visual point Sierra, in the south of the island. Being so high took as a while to descent and make some nice manouvers between the clouds.

Descending through the clouds

Finaly after 1,30 hour long flight we have landed at the La Palma’s “El Mazo Airport”. This airport is considered one of the world’s most complicated approaches, however with its 2,2 km long runway it is nothing special for our Piper ;-).

Seconds before landing at La Palma

Our Piper was parked as it should on a nice place, where even an Airbus 330/340 could be parked. A realy big honor for this plane ;-).

We knew, that we had not much time, as the storm was comming sooner or later, so we have decided to go quickly to the restaurant Casa Goyo, situated under the extended centerline of the runway, just between the extended centerline´s lights. They have a lot of specialities, good quality-price relationship and also very good seafood. This restaurant is situated in a walking distance from the airport, some 10 minutes. 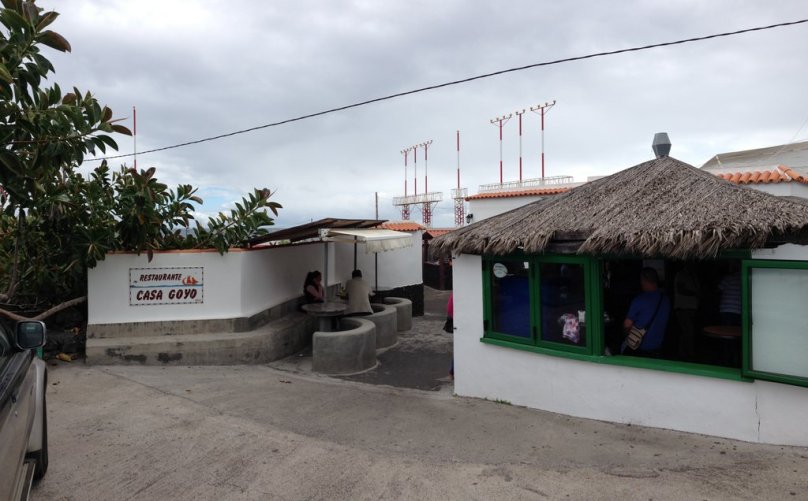 It consists of small wooden houses, where you can sit, or small rooms, where you can enjoy some privacy as well. We had some paella, which was already ready and we didn’t had to wait, as we had to be pretty quick. So to come over to La Palma to eat this small plate of paella costs around 200€ ;-); not to shabby 😉 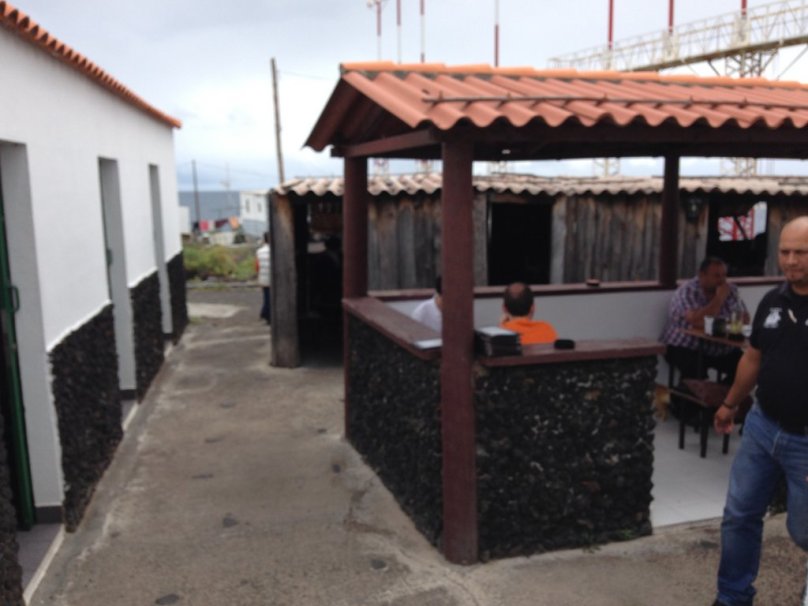 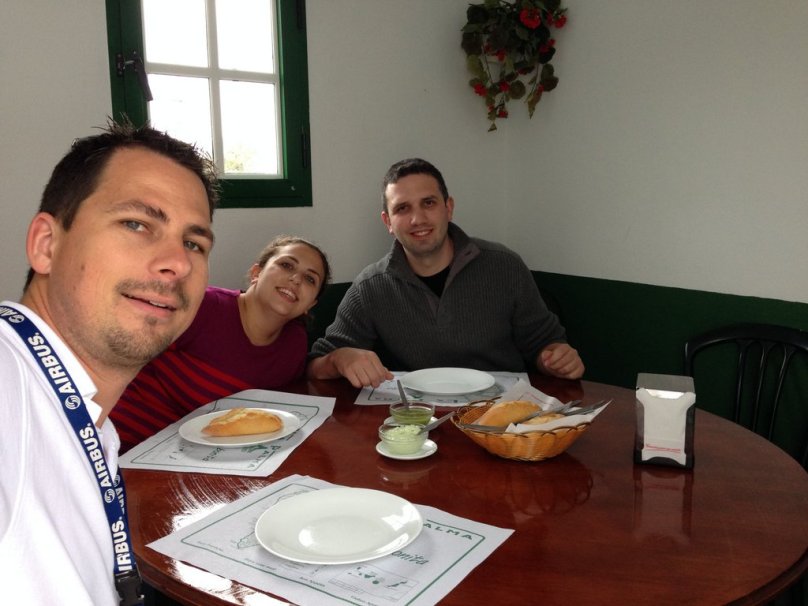 This one is better 😉 Waiting for the paella.

After the lunch we took a taxi (6€) and we hurried up back to the airport to pay the taxes (18€), made our new flight plane and departed direction Tenerife. There were pretty much clouds than earlier this day, so Daldo had to climb up to 10,000 feet and fly around the clouds to avoid them. The views were even more spectacular. 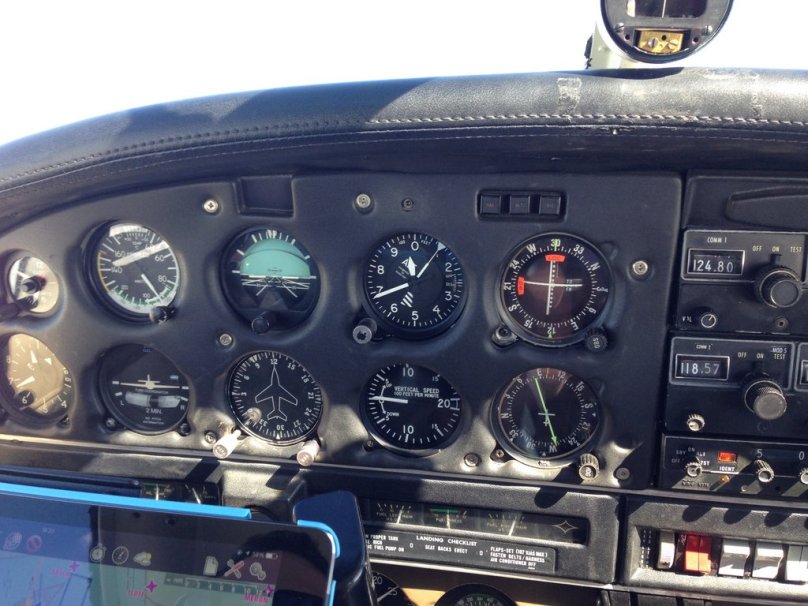 Flying between the clouds 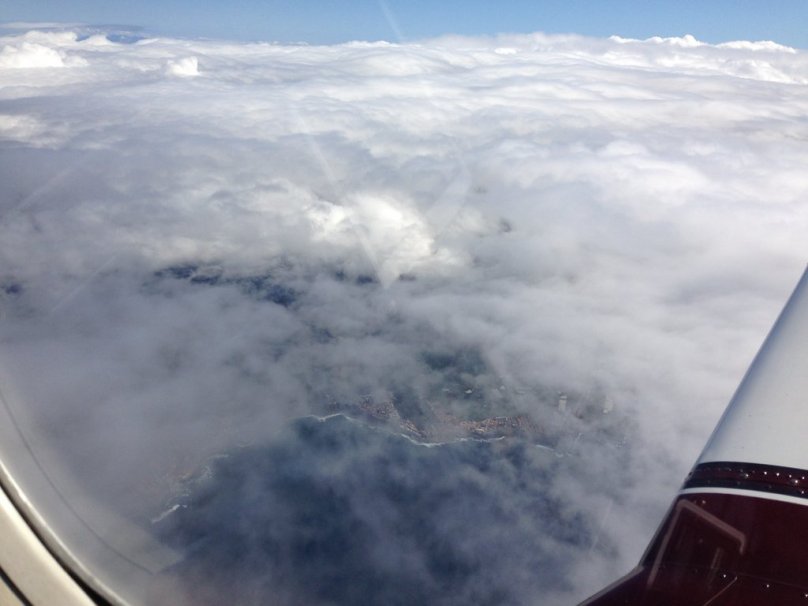 The north coast of Tenerife can be seen through the clouds 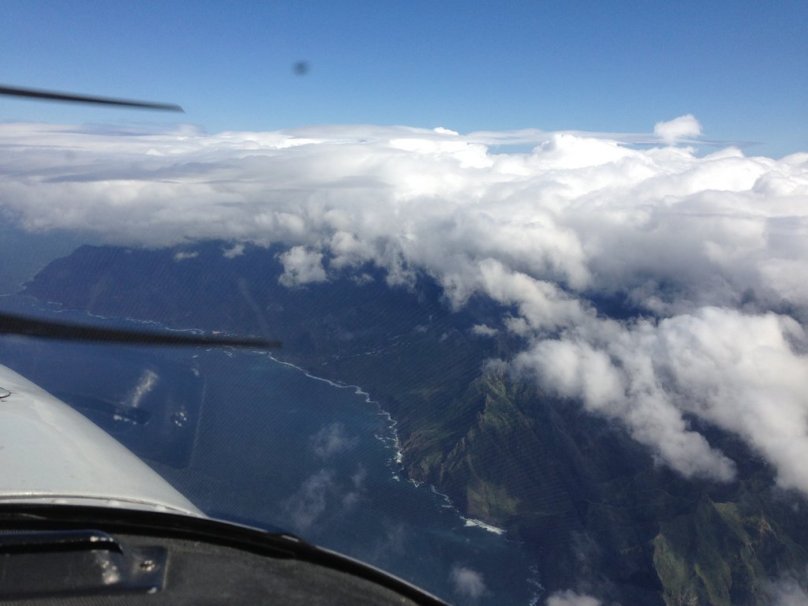 Only a couple of minutes later after our landing, when the plane was parked outside the hangar, it started to rain and the visibility dropped down significantly. This was a perfect planning, in the other case we would have had diverted to the alternative Tenerife south airport.

A short video of the descent, cloudsurfing, approach and landing at the La Palma Airport. The Gopro has been mounted on tail of the plane.

We have returned a washed and clean airplane 😉